A passive wireless sensing system consists of two main components: SAW sensing elements connected to antennas and an electronic interrogation unit called a reader, which is connected to its own antenna. The reader launches the interrogation signal that is picked up by the sensor's antenna. The sensing element does not contain any source of DC power, it works as a passive back-scatterer reflecting the interrogation signal back to the reader. The backscattered signal reflects the frequency of oscillation affected by a physical measurand. The reader analyses the received back-scattered signal and produces the value of the physical measurand.

The read range for passive wireless sensors is limited by the interrogation power and depends on the required sensor resolution and the update rate. For an interrogation power of 10mW, the typical sensor read range does not need to exceed a few meters for an update period of tens of milliseconds. In most applications for non-contact torque measurements on rotating parts, the distance between the sensor antenna and the reader antenna does not need to be more than 10mm, and the torque update period can be as small as 100 microseconds.

The key part of the SAW sensing element is a SAW device made on a polished piezoelectric substrate. The surface acoustic wave propagates on its surface after being excited by a miniature inter-digital transducer (IDT), a thin-film aluminium structure formed by a standard photolithographic process used for manufacturing integrated circuits. The IDT converts electric RF pulses with a frequency of hundreds of MHz into the SAW and returns into a RF signal due to the piezoelectric effect. If the IDT is surrounded by the Bragg reflecting gratings in the form of periodic arrays of thin aluminum strips, then the energy of the SAW is trapped inside the cavity between the gratings, and the SAW device works as a resonator.

Transense has developed SAW sensing elements having two to three SAW resonators each. Several resonators are needed to cancel the influence of a potentially variable reactance of the antenna on the measured value, and measure accurately and independently both strain and temperature. The latter is achieved by selecting a particular orientation of SAW resonators on anisotropic quartz substrates, and selecting a particular cut of the quartz for maximizing the strain sensitivity and optimisation of the temperature characteristics.

To turn the SAW device into a practical sensing element its is packaged to protect it from the environment and efficiently coupled to the physical measurand. Transense has developed packages for pressure and temperature (up to 150 psi), as well as torque/strain and temperature measurement (up to 500-800 microstrain) within the temperature range of -40˚C to +150˚C. Some packages are made of metal, others are all-quartz packages (AQP) that are especially well-suited for high-volume and low-cost applications. 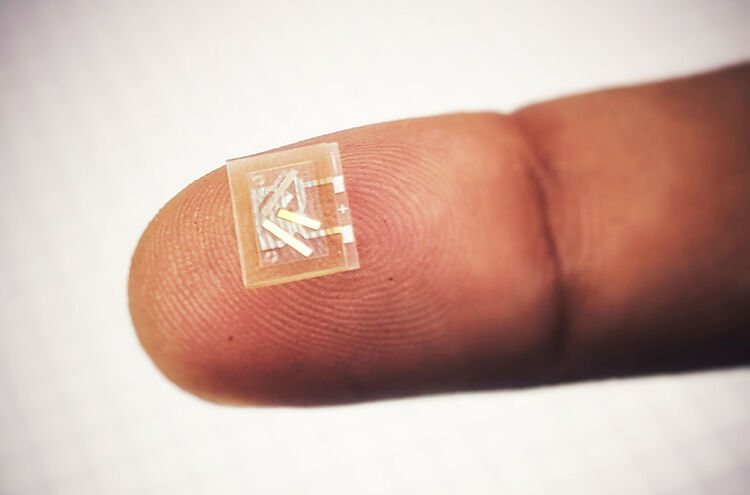 The reader developed by Transense can wirelessly measure from one to five resonant frequencies of the SAW sensing elements. A key component of the reader is a radio frequency application-specific integrated circuit (RF ASIC) that Transense developed with Melexis NV, a renowned manufacturer of advanced integrated circuits for the automotive industry. The RF ASIC is a specialised UHF transceiver that allows a very fast and accurate measurement of the SAW resonant frequencies. The RF ASIC reduces the size and the cost of the reader to the level acceptable for high-volume automotive applications. Apart from the RF ASIC, there is one more key component of the reader, a digital signal processor (DSP) that controls the operation of the transceiver, performs spectral analysis of the SAW response, and calculates the physical measurands such as strain/torque/pressure and temperature.

The standard Transense SAW reader has both analogue and digital CAN and SPI outputs transmitting samples of strain/torque and temperature with a maximum update frequency of 6.67 kHz. The accuracy of the frequency measurement is better than 1 kHz at 430 MHz which is sufficient for most applications.

Transense has also developed specialised readers with various form factors, multichannel readers with up to eight RF channels and a high-speed reader with a strain/torque update rate of 16 kHz; the fastest available on the market.

A typical arrangement of the SAW torque/strain sensing system includes one reader, one or two SAW sensing elements bonded to the shaft or any other part, and an RF rotary coupler with a stator playing the role of the near-field reader antenna, and a rotor working as a near-field sensor antenna.

When the strain, torque or thrust is measured on rotating parts, we use a pair of near-field close-coupled antenna to wirelessly transmit the frequencies. We call this a 'RF rotary coupler'. Usually, the RF rotary coupler is designed as a bespoke component that fits into the available space and suits the mechanical tolerances of a particular application. The main requirements for each design are to ensure (a) a sufficient amplitude of the SAW response at any angular position and (b) the minimal variation of the measured SAW resonant frequencies with rotation.

Transense has developed RF rotary couplers with a planar and coaxial cylindrical geometry for shaft diameters from 10mm to 420mm, with gaps between the rotor and the stator from 1mm to 20mm, and for rotational speeds up to 30,000 rpm. Most of them are based on an inexpensive PCB material and can often be used as a standard solution for several different applications.